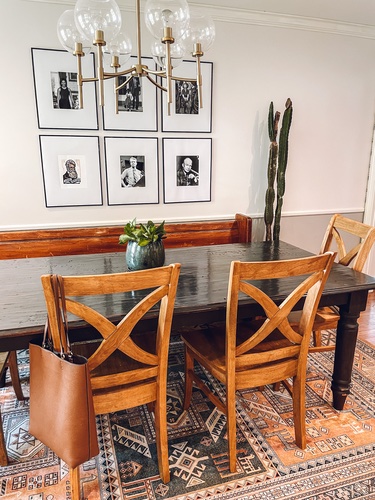 The dining room had gotten a little stale, to put it mildly. We’d had a Christmas drawing framed on our wall for over a year. Plus, two of the dining room chairs my family used when I was a child finally bit the dust.

We moved the two intact chairs to other parts of the house and bought four inexpensive wood chairs online. Although assembling them was a pain, I’m happy to report that they’re very solid and comfortable. A great deal!

I moved the chairs to the driveway and applied stain and polyurethane. And then left them outside for hours because we’re classy.

We bought black picture frames from Michaels and filled them with pictures of people who inspire us. John chose John Brown, the abolitionist. I chose Dorothy Day, one daughter chose Michelle Obama, and the other chose Ruby Bridges. One of the boys wanted a Russian dictator, and we somehow talked him into Eisenhower instead. The other boy refused to choose, so I picked Jimmy Carter for him.

Despite the drama involved, it was a satisfying (and easy) project. And the selection process led to some powerful conversations.

My mom suggested that we switch out the photos every week, which made me smile. We’d never have the time or patience to switch things up that often, but it’s nice to know that we can change out the pictures every few months. For now, I’m enjoying our low-cost refresh.

Walls: Snowbound and Light French Gray, both by Sherwin Williams. Rug is from Wayfair.

Over the past few weeks, we’ve been cleaning and fixing up our screened…

Easter is one of my favorite holidays, full of lots of family traditions. It&#8217…

Thanks for visiting! I'm Vanessa, and I live in the D.C. suburbs with my husband, John, and our four kids. We bought a tiny, old house and have spent years updating it to make it our own. Come see what we've learned about creating a cozy home on a budget!

As an Amazon Associate I earn from qualifying purchases at no extra cost to you. Thank you for supporting the brands that support this blog.